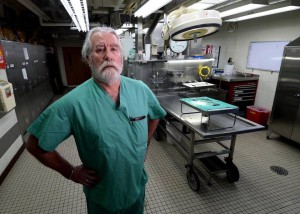 By The Charlotte Observer Staff

CHARLOTTE, NC (Fred Clasen-Kelly and Cleve R. Wootson Jr./ The Charlotte Observer)- The Charlotte woman didn’t know her daughter was a drug addict until she heard a thud upstairs.

Her daughter, a bright Myers Park High graduate, had returned from college for the weekend with a sack of dirty laundry. Her mother was folding clothes in the den when she heard the fall of her daughter’s unconscious body.

“She’s unconscious on the floor, blue, not breathing. No heartbeat,” said the mother, who spoke on the condition that neither she nor her daughter be identified to avoid hurting her future prospects. “I started screaming.”

Unlike thousands of others in North Carolina, the young woman survived a path that began with the abuse of prescription drugs.

Those drugs are fueling a nationwide epidemic of overdose deaths that has been worsened by doctors who overprescribe addictive painkillers.

But now concern is shifting to doctors’ offices, where OxyContin, Vicodin and other high-strength opioids are widely prescribed for chronic pain, even as limited evidence exists about their long-term benefits and risks.

The state’s rate of fatal drug overdoses has jumped about 75 percent since 2002, federal data show. Experts predict the epidemic will worsen without swift action from doctors and policymakers.

“This is now an unequivocal public health crisis,” Dr. Scott Kirby, chief medical officer for the N.C. Medical Board, told the Observer.

North Carolina leaders have created new training requirements for doctors to renew their licenses. They notify physicians who may be writing excessive prescriptions and track when prescriptions lead to overdose deaths.

Nearly half of the accidental drug overdose deaths in 2010 were associated with prescriptions that had been filled within 60 days of the death, according to a state report.

Major medical groups suggest excessive prescribing practices are behind the dramatic rise in overdose deaths nationwide. They have surpassed car crashes as the leading cause of injury deaths in the United States.

On Thursday, American Medical Association President Steven Stack called on doctors to take the lead in reversing the opioid crisis.

“Our nation is needlessly losing thousands of people to a preventable epidemic, and we must take action for our patients,” Stack said. “The loss of lives we are seeing around us and in the news every day is unacceptable – and we don’t have to accept it.”

Other states have seen decreases in illegal drug activity with stepped up monitoring of prescriptions. Some North Carolina doctors, however, have been slow to embrace the changes.

Years before her mother found her unconscious, the young Charlotte woman visited a friend’s house. She was offered Percocet, a prescription painkiller. She ground up the pill and snorted it.

“Five minutes later I’m sitting on this guy’s porch feeling the best feeling I have felt in my entire life,” she recalled.

She spent the next few years chasing that first high. She experimented with stronger opioid pain pills, and started buying hydrocodone and oxycodone from friends, then from dealers.

She recalls suffering from withdrawal as she was hanging out with a friend who used heroin. “He was saying why are you spending all this money on pain pills when you can be getting so much more heroin for so much cheaper,” she recalled.

He injected her for the first time that night.

Now she was buying heroin instead of pain pills.

What followed was a years-long cycle of rehabilitation and relapse. She stole money from her family for money to buy drugs. She overdosed at least three times in her mother’s house.

She’s since been through a 28-day treatment program, gotten a job and moved in with her mom.

“I come home every day and I clean and I cook and I go to my meetings and I go to work,” she said. “I’m happy and I’m joyous and I’m pleased that I can help instead of always taking.”

Experts and counselors say the journey from recreational drug use to addiction echoes a familiar path.

“They bounce back and forth between prescription drugs and heroin, whatever is easier to get,” said Dr. Robert Martin, a substance abuse interventionist and the former director of substance abuse services for Carolinas Medical Center. “The high that you get from an opiate is all pretty much the same except what delivery system do you use.”

When pharmaceutical companies started producing powerful painkillers in the 1990s, doctors were among the biggest skeptics.

They worried the drugs could lead to addiction. Some warned that patients would need increasingly higher doses for the drugs to remain effective.

“We overexposed the U.S. population to opioid drugs,” Kolodny said.

Now, experts say, doctors should encourage patients to try alternative treatments, such as exercise or yoga.

“We shouldn’t be reaching for opioid medications first,” said Dr. Thomas Tape, who is helping develop new guidelines for prescribing painkillers for the Centers for Disease Control and Prevention. “We should try safer, less dangerous methods first.”

A federal report showed that in 2012, North Carolina had 97 painkiller prescriptions written per 100 people. That rate was the 13th highest in the U.S., according to the CDC.

Dr. Chad Howard had just opened an outpatient clinic in Monroe in 2012 when the N.C. Medical Board fielded a complaint that he was writing prescriptions for patients who sold the drugs on the street.

The board reprimanded Howard for multiple failures, including prescribing the maximum dosages of buprenorphine, a drug used for opiate addiction therapy that is also vulnerable to abuse.

Howard acknowledges his mistakes, but said he closed the clinic because it was difficult to determine if patients were truly in need – or lying to obtain more drugs. In fact, he said the complaint was brought by a local drug dealer who viewed his practice as competition.

“You have drug dealers, people with legitimate pain and drug abusers all coming in,” said Howard, who now works in an Elizabeth City hospital. “There is no happy medium for doctors to exist.”

Doctors have a responsibility to ensure drugs they prescribe are not abused or diverted for illegal use, said Kirby of the N.C. Medical Board.

Since last year, North Carolina officials have alerted more than 1,700 prescribers that they may be overprescribing painkillers. There are roughly 34,000 doctors licensed in the state. The information will be used to help doctors decide if they need to change their habits.

In the past, doctors resisted prescribing addictive painkillers unless patients were terminally ill, said Dr. Robert “Charles” Monteiro, the former president of the N.C. Medical Society.

But direct-to-consumer advertising prompted patients to demand medication they learned about by watching television, Monteiro said.

“You had the perfect storm,” he said. “There was market pressure. There was a cultural shift.”

Monteiro, a Chapel Hill internal medicine physician, said he now requires patients to agree to drug testing before writing prescriptions so he can verify they are taking the drugs he gives them, and not diverting the pills illegally.

He said doctors must acknowledge their role in the drug overdose crisis.

Even as deaths mounted over the past decade, North Carolina officials failed to respond quickly, says a 2014 report from the N.C. Program Evaluation Division, the research arm for the General Assembly.

They did not provide doctors specific guidelines on prescribing painkillers or produce a coordinated strategy to combat the problem, the report said.

State officials have maintained a database that tracks prescriptions for controlled substances since 2007. But unlike some other states, North Carolina does not make it mandatory for doctors to check the database before writing prescriptions.

Physicians, pharmacists and others use the system only 6 percent of the time, according to the report.

North Carolina officials acknowledge that some doctors initially refused to use the prescription database because they said it was cumbersome and time consuming when it was rolled out. Officials say those problems have been fixed and more doctors are registering to use the system.

Horn, the Union County lawmaker, said he wants to make it mandatory for doctors to check the database before writing prescriptions for opioids.

State medical and public health officials said they have long made reversing the rise in overdose deaths a top priority.

Kirby, chief medical officer for the state Medical Board, said his agency several years ago issued a position statement on the issue, giving doctors general guidelines on how to prescribe painkillers. The agency produced a new position statement more recently, which provides specific recommendations and suggests doctors try alternatives before turning to drugs to treat pain.

Kirby said doctors relied on misleading information from pharmaceutical companies when they began prescribing the painkillers, and potential risks were not fully understood.

The push will help the state strike a balance, Kirby said, between keeping the public safe and allowing patients who need the drugs to obtain them.